Rumford: Fabian Stocek of Jilemnice, CZE and skiing for Dartmouth College skated to Freestyle Gold in Day 2 of the 2017 Bates Carnival on Februaty 25th. Stockek completed the 20K mass start in 51:15.9 to grab 1st place. 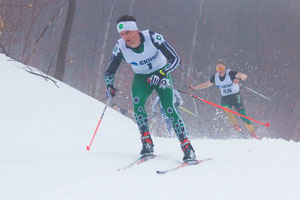 Williams College's Jordan Fields of South Woodstock, Vermont captured the silver with a time of 51:22.5. Williams' Eli Hoenig, the winner of the 10K Classical race on Day 1, took the bronze, crossing the finish line in 51:48.9. Rounding out the top 10 were Luke Brown and Gavin McEwen of Dartmouth, Juri Miosga of UVM, Braden Becker of Williams, Silas Eastman of Colby, Nick Gardnier of Williams, and Koby Gordon of Dartmouth. 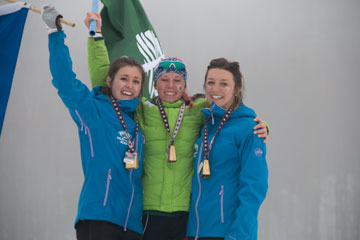 Wisconsin finished in 45.03.2 to win the silver, edging teammate Amy Bianco of Eli, Minnesota who was right with her at the finish line at 45.03.5. Other top 10 finishers were Elizabeth Gill of UNH, Hannah Miller of Bowdoin, Lydia Blanchet, Abigail Drach, and Taryn Hunt-Smith of Dartmouth, Lucy Hochschartnet of Saint Lawrence, and Zoe Snow of Dartmouth.

Rumford: Eli Hoenig of Williams College and Sadie James of Bates College skied past the competition to capture Nordic Classical Gold on Day 1 of the Bates Carnival 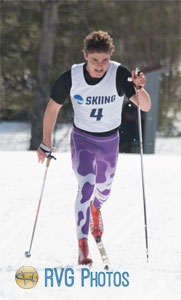 at Black Mountain Ski Resort on February 24th. Hoenig completed the 10K course in 28"56.0 to take first place, finishing 9 seconds ahead of teammate Braden Becker, who won the silver. Grabbing the bronze medal was Connor Hrynuk of UMPI, who skied the course in a time of 29:36.9.

James, a graduate of Mt. Abram High School in Salem, Maine, capture first place by completing the 5K course in 16:05.2. She was followed by University of Vermont's Alayna Sonnesyn, who finished in 16:26.3. Grabbing the 3rd podium spot was Iris Pessey of Vermont with a time of 16:42.3. 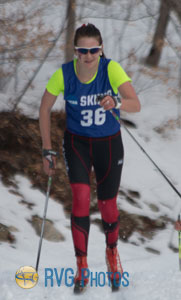 awarded to the top Maine Nordic College Ski Team based on results in the Classical race. This year the award went to host Bates College. Ray Broomhall, standing in for his brother Chummy, helped Andy Shepard present the award.

Competition continues tomorrow with the Men's 20K and Women's 15K Mass Start Freestyle Races on Chummy's 5K course. The men's race is scheduled to begin at 10:00 am, followed by the women's race at 11:30.

Black Mountain's historic cross country ski trails will be the site of the Bates Carnival, which will be the 2017 NCAA Regional Championships on Friday, February 24th and Saturday, February 25th. Friday's races will include the Men's 10km and Women's 5km Classical Races. These races will have a 30 second interval start using the 5km Ray's Course. The Friday races will also serve at the Chummy Broomhall Cup competition. The Broomhall Cup, named after Rumford's legendary Olympian Chummy Broomhall, is given annually to the Maine College who perfoms best in the nordic classical competition.

Racing will continue on Saturday with the Men's 20km and Women's 15km Mass Start freestyle. This race will be run on the 5km Chummy trail.

In the team scoring, it was FAST taking the top spot with an impressive team score of 22 points. They were followed by CMSC with 45 points while Portland came in third with 60 points.
In the boys' competition, it was Farmington's Jackson Joyce taking the top podium position with a time of 11:20.1. He was followed by Portland's Ben Horrisberger, who skied to a tune of 11:24.1. Nate Livingood of Falmouth grabbed the final medal position with a time of 11:31.8. Rounding out the top 10 were Telstar's Eli Shifrin, Mountain Valley's Aaron Labrash, Gray-New Gloucester's William Maines, Deven Edge of Auburn, Jayshaun Wright of Mtn. Valley, Telstar's Dylan Greenberg, and Burke Macleay of CMSC.
Top boys team honors went to Auburn with 56 points. Central Maine Ski Club was second with 84 points with Telstar taking third place with 75 points.
Complete results may be accessed by clicking here.

In team competition Mt. Blue girls finished with 25 points to take the team championship, followed by Maranacook HS with 47 points and Yarmouth HS with 78.

In a very tight race for the team championship, the boys from Mount Blue came in 1st with 39 points, followed by Maranacook with 40, and Freeport finished 3rd with 44 points.

Race photos are available at https://rivervalleygraphics.smugmug.com/Skiing/2015-Sassi-Memorial-5K. 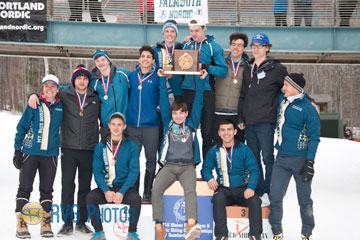 The Mt. Blue boys captured the 2018 MPA Class A Nordic Championship on Black Mountain's  John Roderick Trail System on February 23rd. This year's event featured a Nordic pursuit race, which was the first of its kind for the state championships. The Cougars finished with 40 points, while runners up Falmouth HS finished second with 57 points.

The individual winner of the men's pursuit race was Portland High School sophomore Liam Niles. Niles started the race just one second behind the Classical Champion Roy Varney of Leavitt and passed him during the first of two laps on the 2.5k course. Varney finished second in the pursuit, followed by Deering High School's Peter Jordan.

The Freestyle race gold medalist was Ethan Livingwood of Falmouth, who skated the course in :13:39.2. Taking the silver medal was Jordan, who crossed the finish line in :13:40.8. Winning the bronze medal was Alfie Walker of Fryeburg Academy with a tiem of :13:56.6.

In the women's competition, the Fryeburg Academy ladies edged the Deering Rams, 38-39 to win the Class A Nordic Championship. 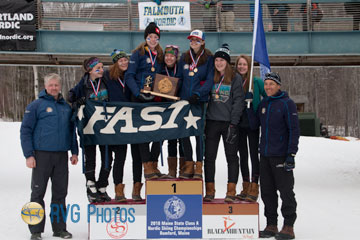 The pursuit champion was Morse High School Junior Jen Wilbraham. Wilbraham was the first out of the stadium due to her gold medal finish in Day 1's Classical race. Finishing second to Wilbraham was Emily Carty of Fryeburg, while Freshman Eva Clement of Falmouth HS finished third.
The gold medalist in the Freestyle race was Carty, with Clement taking the silver and Wilbraham the bronze.

Varney and Wilbraham Take Gold in State A 5k Classical 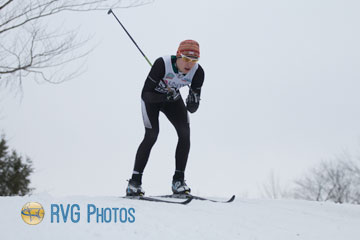 Varney completed the two-lap course in :15:53.1. Finishing in second place was Liam Niles of Portland HS, who finished in :15:54.5. Grabbing the final podium spot was Peter Jorday of Deering HS, who crossed the finish line at :16:32.6.

Team scores have the Mt. Blue boys with a comfortable lead over Leavitt and Falmouth. 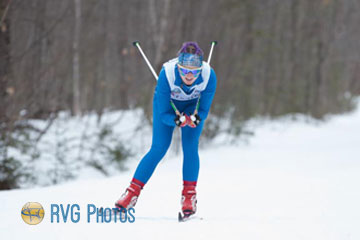 The Fryeburg girls have the lead over Deering after this first day of competition.

Races continue tomorrow with the 5k Freestyle pursuit. Races start at 9:00 am with the men going out first.