This Chisholm Ski Club hosted a successful Androscoggin Sprint Canoe/Kayak/Stand Up Paddling in Rumford on August 28, 2021. The 4-mile course on the beautiful Androscoggin River began and ended at the Rumford Public Boat Launch. It was a new endeavor for the Legendary Chisholm Ski Club, know for hosting world class Nordic and Alpine ski races. The Club merged forces with Envision as part of their Androscoggin Adventure.

The fastest racers of the day were Mark Ranco and Chip Loring. 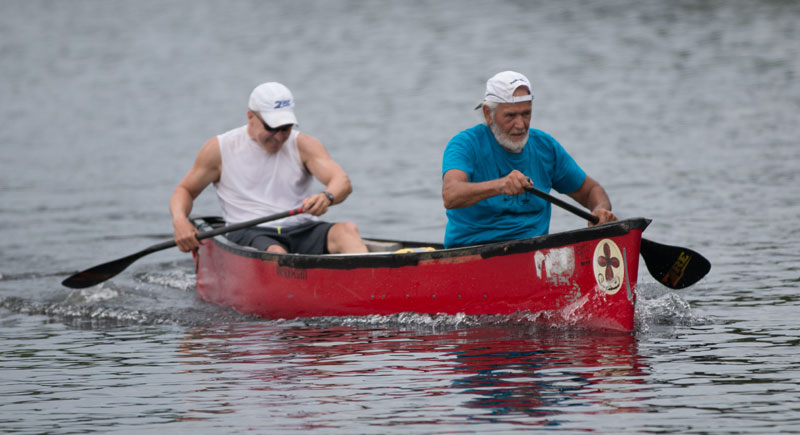 Racing in the two-man canoe class and racing the #1 canoe, they were first across the finish line with a time of :47:39.9. Second place went to the father/son tandem of Seth and Tom Carey, They finished in 1:04:34. In third place was the team of Jason and Katie Brown, who paddled across the finish at 1:07:43.3.

In the solo women’s kayak class, Maine Canoe & Kayak Racing Organization president Aili Hartikka captured the gold with a time of :52:22.1. The silver went to Barb Rajaniemi, who finished in 1:11:13.6.

In the men’s kayak, Searsmont’s Shawn Rumery took first place, crossing the finish buoys with a time of :54:26.4.. Norman Greenberg was second with a time of :55:13.5. Rilan Farnum used some fancy maneuvering as he approached the finish line to capture the final podium position, finishing in 1:07:32.1.

In the Stand Up Paddleing class, Tracyn Thayer captured gold with a strong time of :55:06.2.

The SUP male gold medalist was Stephen Leen, who crossed the finish buoys at :56:46.4.

The Androscoggin Sprint was part of the Androscoggin Adventure, and was a joint venture between EnvisionRumford and the Chisholm Ski Club. Other events of the day included a fun float from Rumford Point and the Rumford Boat Launch, a Cornhole tournament, food by Volkernick Sausage, and music by Jim Gallant.

The Club would like to thank the Chisholm volunteers, EnvisionRumford, the Town of Rumford, the Rumford Fire Department, the Rumford Polar Bears Snowmobile Club, Mahoosuc Search and Rescue, Volkernick Sausage, and our event sponsors: The Philbrick Place, CEI Consultants, The Barn Collection, Dan "Mouse" Warner, Black Mountain of Maine, and Community Energy.

Photos from the days events are available at RVG Photos.