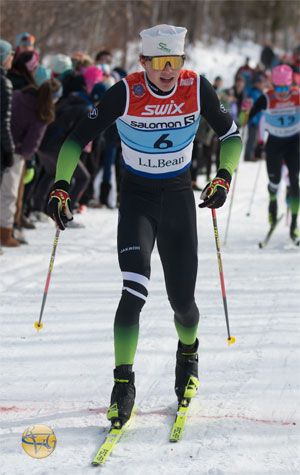 in the 1.2k Classic Sprint. In the Men’s Open division, Tabor Greenberg of the Green Mountain Valley School advanced to the finals by winning each of his 2 qualifying heats. In the final sprint, Greenberg captured the gold, crossing the uphill finish ahead of his 5 competitors. In second place was his teammate Parke Chapin. The final podium position went to Eastern Massachusetts XC’s Nathan Doughty.

In the Women’s Open class, EMXC’s Evelyn Walton to top honors. She also had won both of her qualifying runs. The silver medal was won by Sofia Scirica of EMXC with Maddie Hooker of Stratton Mountain taking third. 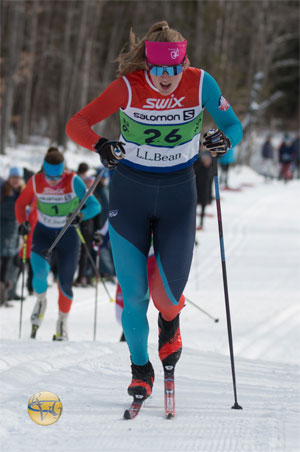 The  Women’s U18/U20 sprint was captured by Crafsbury Ski Club’s Meg Voison. Second place went to Caroline Tarmy of Statton Mountain while the bronze medal was won any Ann Rightmire of Ford Sayre.

The final two sprint races of the day were the U16 boys and girls. Craftsbury skier Sisu Lange skated across the finish line first to win the gold. Lorenzo Atocha of the Green Mountain team took second and third across the line was Charlie Kehler, also of Craftsbury.

The U16 girls completed the weekend of racing with Shaftsbury, Vermont’s Tanis White taking the gold. Leigh Niedeck of Eastern Massachusetts came in second while Lea Perreard of Ford Sayre took the final podium spot of the day.

The Chisholm Ski Club would like thank all of its volunteers, officials, NENSA staff, skiers and parents for a great weekend of competition.