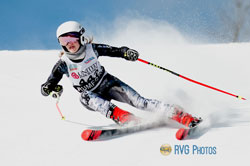 Black Mountain on February 5th with the Giant Slalom Competition. Taylor Gordon of Mt. Blue High School was the fastest girl in the league competition.  Her winning combined time was 1:47.85.  Anna Baldwin of Hampden Academy came in second with a time of 1:52.05. Third place went to Oxford Hills HS sophomore Liz Dieterich, whose combined time was 1:53.14. Also finishing in the top six were Jordan Cummings of Edward Little High School, Mazie Gordon of Mt. Blue, and Anna Erb of Maranacook High School. 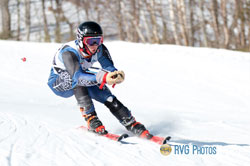 second with a time of 1:40.32. Sam McKee of Maranacook HS was the third fastest on the day with a combine score of 1:44.02. Rounding out the top six were Jake Mills of Oxford Hills HS, Caellen Robert of Camden Hills HS, and the Red Eddies Connor Brann.

The KVAC Alpine Championships are schedule to conclude on Saturday at Titcomb Mtn with the slalom compepition.