The 2019 Kennebec Valley Athletic Conference and the Mountain Valley Conference held their combined league championships on Wednesday February 6th at Black Mountain of Maine in Rumford and on Saturday, February 9th at Titcomb Mountain in Farmington.

Maranacook junior Carter McPhedran claimed the 2019 KVAC Nordic Freestyle Championship at Titcomb Mountain in Farmington with a time of 13:13.2. Finishing in second place in the skate race was classical champion Roy Varney of Leavitt High School, who finished with a time of 13:14.0. Claiming the final podium spot was Maranacook's Gabe Fein, who completed the 5k course in 13:15.3. Sam Smith of Mt. Blue (13:31.5), Luke Bartol of Maranacook (13:32.2), and Mt. Blue's Dom Giampietro (14:03.4) also finished the course with top times.

Emma Charles of Mt. Blue made it a personal Nordic sweep with her victory in the 5k Freestyle. The promising freshman, who won the classial race earlier in the week at Black Mountain, skated across the finish line in 14:46.7 for the victory. Second place went to Brynne Robbins of Mt. Blue, who had a time of 16:49.1. Taking the bronze was Robbins' teammate Chelsea Seabold with a time of 16:51.7. Also finishing in the top six were Maura Taylor of Maranacook (16:53.2), Mt. Blue's Brynne Robbins (16:49.1), and Sadie Skinner of Mt. Ararat High School (17:22.6).

On a blustery day on the slopes of Titcomb Mountain, Mt. Blue's Ellie Pelletier captured the KVAC Slalom Championships with a combined two-run time of 1:21.84. Her gold medal winning performance was the second victory of the championships, with the Cougar senior also victorious in the Giant Slalom during Day 1 of the competition. Taking the silver medal was her teammate Jenna Hanrahan with a combined time of 1:24.24. Earning the bronze medal was Miranda Chadbourne of Edward Little HS with a score of 1:25.98. Rounding out the top six were EL's Courtney Larson (1:27.44), EL's Jordan Cummings (1:27.68) and Ana Baldwin of Hampden Academy (1:28.29).

Robbie McKee, a junior skiing for Maranacook High School, won the boy's slalom championship with a combined time of 1:14.32. Right behind him was Eli Yeaton of Mt. Blue with a combined time of 1:14.90. Taking third place was Mt. Blue's Sam Smith, who completed both runs with a total of 1:16.27. Also skiing well were Oxford Hills junior Jacob Mills (1:16.53), his teammate and GS champion Colby Vandecker (1:16.93), and Edward Little's Christian Beliveau (1:17.93)

The Edward Little girls and the Mt. Blue boys are the 2019 KVAC Alpine team champions.

Titcomb Mountain in Farmington was the site of the MVC Nordic Championships final day of competition which concluded with the freestyle.  On the boys side, David Kidd of the dominant Mt. Abram team captured the 2019 MVC Freestyle Championship.  His winning time was 14:26.7.  In second place was Brandon Hemingway of Mt. Abram (14:27.4) and in third was Dillon Wells of Mt. Abram (14:30.1).  Also finishing in the top six were Mt. Abram's Levi Bouchard (14:39.4, Kyle Gunnels of Monmouth Academy (14:51.1), and Mt. Abram's Chandler Rollins (15:03.2)

The Mt. Abram boys and the Orono girls are the 2019 MVC Nordic Team Champions.

In Day 2 of the MVC Alpine Championships at Titcomb Mountain in Farmington, it was Rangeley High School's Hannah McMillan winning the slalom competition with a combined time of 1:25.61. It was the second victory in a row for the talented freshman, who won the GS race on Wednesday at Black Mountain. Taking second place was Adria Plourde of Spruce Mountain, who finished with a combined time of 1:28.42. Third place went to Mt. Abram's Alice Mackay at 1:28.92. Also having a great race day was skimeister Julia Pomeroy of Spruce Mountain (1:29.44), Abbey Landry of Telstar (1:29.84), and Mountain Valley's Maddy Papianou (1:32.00).

Also winning for the second time in these championships was Maguire Anuszewski of Winthrop. The GS Champion won Saturday's slalom competition with a two-run combined time of 1:22.22. Taking second place on the windy slope was Gage Sampson of Spruce Mountain (1:25.80 ). Also earning a podium spot was Spruce Mountain's Jack Gilbert, whose combined time was 1:26.95. Completing the top six finishers were Gilbert's teammate and brother, Noah Gilbert (1:33.45), Mountain Valley's Aaron Babrash (1:38.10), and Max Ochtera of Telstar (1:40.21).

The Spruce Mtn boys and the Telstar and Spruce Mtn girls are the 2019 MVC Alpine team champions. 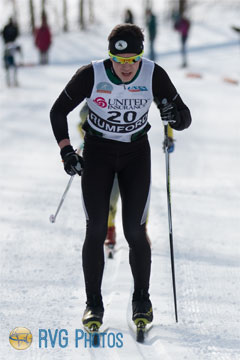 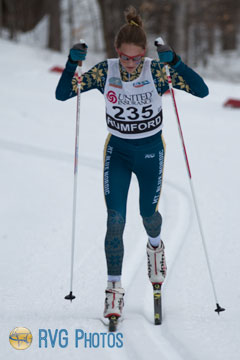 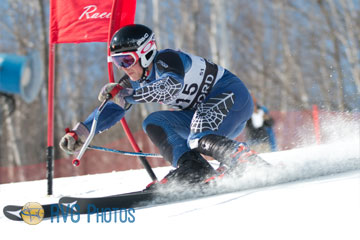 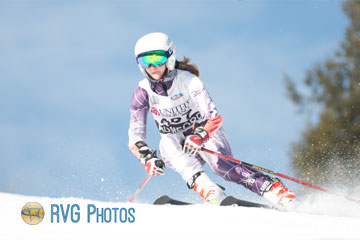 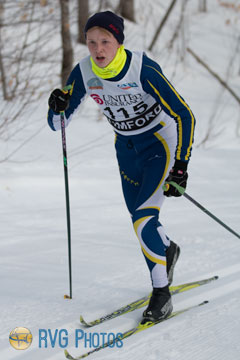 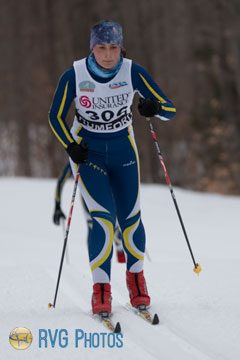 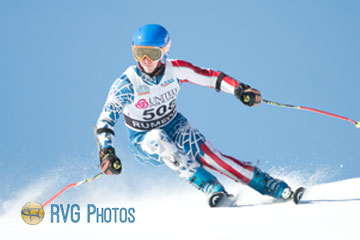 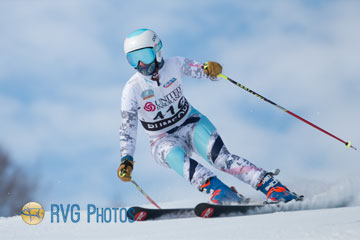