I Wanna Ski with Somebody Kicks off Nordic Season

The Chisholm Ski Club and Black Mountain, in conjunction with Nonstop Nordic, hosted its first nodic race of the 2020-21 season on January 30th. The Classical style races were three in number, a 10k Citizens Race, a 5k High School Race, and a 3k Middle School Race. 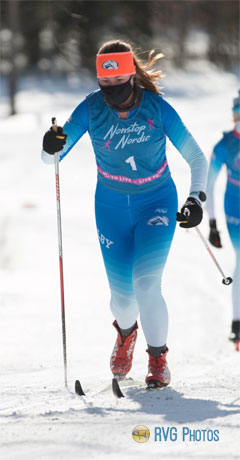 Division winners in the Citizens Race were Kirsten Miller in the women's 18-29 age division. Miller, skiing for Colby Skiing, finished the 10k course on the Roderick Trail System with a time of 35:00.6. Pownal, Maine's Heather Liimikka won the women's 30-49 division, crossing the finish line in 46:20.4. Tracey Cote took the women's over 50 division in 38:26.7. 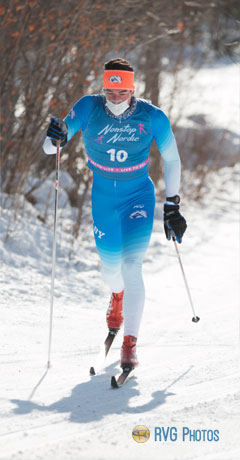 At the completion of the 10k race, middle school skiers from around the state gathered in Broomhall Stadium for the start of the 3k race. Nora Condit of Auburn won the girls race, completing Scotty's 3066m course in 12:53.0. Second place went to Anneliese Collin of Portland with a time of 13:08.6. Lucy Fullerton of Kittery took third place with a time of 14:05.2.

In the boys Middle School Race, Tait Harvey of Cumberland won the gold with a 12:24.3 finish. Zeke Zelonish of Portland came in second with a 12:41.1 time and Auburn's Orrin Slover crossed the finish line in 13:15.6 to take third.

In the afternoon the competition returned to the Paul's 5k course, featuring the high school division skiers, divided into divisions of grades 9-10 and 11-12. The first girls' finisher in the freshman/sophomore division was Annabelle Brooks of Portland, who strided across the line in 17:57.2. Second and third places went to Bridget Reusch of Farmington and Elise Creagan of York.

The winner of the girls 11/12 grade division was familiar podium figure Emma Charles of Farmington, who completed the 4960m course in 15:57.5. Eliza Skillings of Gould Academy came in second at 17:18.3, while third place went to Brynne Robbins of Vienna with a time of 17:39.7.

In the high school boys race, Gould Academy's Eli Shifrin was the first across the line in 14:34.4. Ellis Slover of Lewiston was second at 14:52.9. Benjamin Condit fo Auburn took third with a time of 15:20.8

Special thanks to all the volunteers who helped make this race a success.

The next race in the series is the Born to Ski Freestyle Race at Pine Hill Trails in Bethel, Maine on February  6th.