Black Mountain of Maine and the Chisholm Ski Club were the hosts to the Maine Alpine Racing Association's Giant Slalom for U8/U10 Girls, U8/U10 Boys, U12 Girls, U12 Boys, and U14 Girls and U14 Boys on Sunday, January 5th. In the Boys U14, 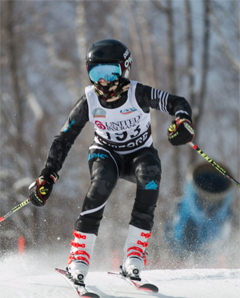 In the girls U14, Raymond, Maine's Avalyn Beaudin grabbed gold with a two run total of 1:19.31. Breezy Quimby of Rangeley took the silver, while Jaden Boulanger out of Newry and skiing for Gould took the bronze.

Samuel Abelson of Gloucester, MA and skiing for GACP, took top honors in the boys Under 12 competition. His two-run total was 1:18.23. Second place went to Oliver Whipple of Yarmouth and skiiing for the Carrabasset Valley Academy team. The final podium position was captured by Poland's Dan Watson, skiing for Lost Valley.

The girls U12 gold was won by Gloucester, MA's Aubrey Abelson (GACP). She had a two-run total of 1:19.95. She was followed by Falmouth's Riley Davis, skiing for CVA.. GAPC's Margo Hesson of Falmouth finsihed in third place.

The boys U10 gold went to Burton Anderson of Marstons Mills, MA, skiing for the Shawnee Peak Race Team. His two-run total was 1:24.96. The silver was won by Anderson's teammate Peyton Toomey of Westbrook. 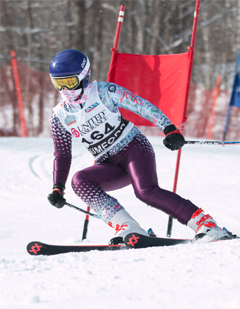 Kira Hiebert of Bethel and skiing for GACP won the girls U10 race with total times of 1:19.91. The silver went to Portsmouth, NY skier Hannah Martin of Shawnee Peak. Finishing in third place was CVA's Quinn Marston of Cape Elizabeth.

In the youngest class, Bethel's Henry Sapak, with a two-run total of 1:40.99 to take the gold for GACP in the boys Under 8. Tucker Lyons, from Marblehead, MA and skiing for Gould, earned the silver. The final podium position was won by Bethel's Wynn Mendenhall, a Gould Future Star.

And finally, CVA's Molly Holman of Kingfield grabbed the girls U8. The silver went to GACP's Madison Lambert of Bethel. Grace Leszczynski, a GACP skier from Rowley, MA, won the bronze.

The Chisholm Ski Club would like to thank the volunteers, coaches, parents and skiers for a great day of fun ski competition.